As expected, Apple has released iOS 8.4 today. We have confirmed that this new operating system fixed the Bluetooth GPS bug that Apple introduced in iOS 8.3. Bluetooth GPS and ADS-B devices including the Dual XGPS 150/160/170, Garmin GLO, and Bad Elf units appear to work as expected.

Please install iOS 8.4 now if the Bluetooth bug has affected you and you plan to fly soon. WiFi-based ADS-B systems were not affected by the bug. Therefore, please wait to install iOS 8.4 if you’re using a WiFi-based ADS-B receiver (Clarity, Stratus*, SkyRadar, iLevil, FreeFlight, or NavWorx) or the iPad’s internal GPS to ensure that there are no new issues with iOS 8.4.
FlyQ EFB Overview

As you know, both Seattle Avionics and the FAA take pilot safety very, very seriously.

Therefore, we are very excited to announce that FAAST (the FAA Safety Team) is promoting a free Webinar (Internet-based live seminar) about pilot safety when using an iPad.  The course qualifies for WINGS credit.

Special emphasis is on FlyQ EFB’s safety features.  The webinar is free but attendance is limited so sign up now.  Tuesday June 30, 7:30 PM Pacific.

The webinar was created and presented by Gary Reeves.  Mr. Reeves is one of only 16 Master Instructors in California and is  the 2014 Flight Instructor and FAAST Member of the Year for the Long Beach FSDO.  As an ATP with over 5,500 hours he is a popular national speaker on iPad use, IFR, and Mountain Flying.

The FAA updates data every 28 days (every 4th Thursday) and a new data cycle begins on Thursday.  We’ve now merged the FAA’s data with our proprietary ChartData and enabled downloads of the ChartData for that new cycle.

We update ChartData several days in advance of each cycle start date so you can download it early.  All US data was made available yesterday or earlier today.

If you haven’t already done so, please be sure to update your ChartData before you fly.

If you need to renew your subscription, click the appropriate link below:

There are at least two meanings to the name “ATLAS.”  One is a reference to the Greek god (or Titan) holding up the world.  We think our new ATLAS is powerful but perhaps not quite that powerful.  The other meaning is about an all-encompassing set of  maps and geographic information.  That’s the one we had in mind with our ATLAS. 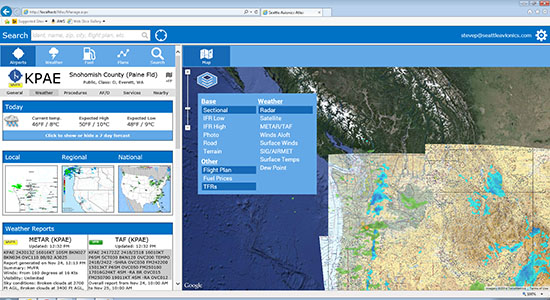 All-new ATLAS is a Web-based aviation information system that includes flight planning, detailed airport info, aviation weather, approach plates, airport diagrams, the A/FD, and much more.  And that’s today.  It will expand very quickly to other functions.  If you haven’t heard about it yet, take a look at the original preview video.

It’s not quite done yet so we wanted to limit the first beta to a very small number of applicants who have already received the beta notice.  if you applied to the beta but did not get an invitation yet, please standby as you’ll get it soon — we want to get it a little closer to finished before everyone sees it.  If you haven’t signed up for the beta, please sign up now and you’ll see it soon!

Just now, at Apple’s developer’s conference, Apple announced that iOS 8.4 will arrive on June 30.  This version includes a fix to the Apple Bluetooth GPS bug.  iOS 8.4 has been in beta testing for some time now and the last two beta releases had the Bluetooth fix.

The reason for June 30 wasn’t given but my guess is that the main point of the release – Apple’s new Apple Music streaming music service — won’t be ready until June 30.

The next beta release of FlyQ EFB 2.0 will include a fix that doesn’t require Apple’s new release but only affects Dual XGPS 150/160/170 users.  Sign up for the beta from: http://seattleavionics.com/beta.aspx

As a reminder, Garmin GLO users can download a Garmin fix for their GPS right now.  See: http://www8.garmin.com/support/agree.jsp?id=5811

All the AOPA Fly-Ins are terrific ways to meet our fellow pilots and have a day of basking in all-things aviation.  The Homecoming at FDK is especially great.  We’re on our way there right now (yes, I’m typing this from a commercial airliner — a bit too far from Seattle with a piston single).

We’ll be previewing the forthcoming releases of FlyQ EFB 2.0 and our all-new Web-based ATLAS flight planner / aviation info system for your PC or Mac.  Of course we’ll also be happy to answer any questions about any of our apps and ChartData services and we’ll have show-only specials on FlyQ EFB.  Hope to see you there.

We’ve been working on ATLAS, a whole new concept in Web-based aviation systems, for some time now.  Longer than I’d like to admit, truth be told.  But now it’s almost ready to see the light of day.  While still not quite feature complete, it’s undergoing internal testing now and it will released to our external beta testers next week.

ATLAS is hard to describe because there has never been anything like it.  Part flight planner (a really, really good one!), part general airport info system, part cheap fuel finder, part preflight weather system, and so on.

Best of all, it links magically with our FlyQ products so you can preflight plan at your desktop or laptop with a large monitor and mouse then grab your iPad and fly with the flight plan you created at your desk.  PC or Mac.

Want to see it in action?  Join the beta test team.  You’ll also be able to see it at the AOPA Homecoming this weekend at FDK.

Watch the preview video to get the idea.  And keep in mind it’s come a long way since the video was made!